Do you love attending Boston Red Sox games but find the cost out of reach or maybe the logistics too difficult?

Well, an afternoon or evening spent at McCoy Stadium can be just as satisfying as a visit to Fenway Park—and at a more reasonable price with easier access.

The Pawtucket Red Sox are a minor league baseball team that plays in the International League. They are the Triple-A affiliate of the Boston Red Sox. McCoy Stadium in Pawtucket, Rhode Island is their home.

Parkside
McCoy is nestled in a small suburb not too far from the Massachusetts/Rhode Island border. The ballpark holds the distinction of hosting the longest game in professional baseball history.

On a cold April 18, 1981 evening, the PawSox and Rochester Red Wings began a baseball marathon that lasted until 4:07 the next morning when play was temporarily halted in the 32nd inning with the score tied at two runs apiece. The game resumed on June 23rd in a quick 33rd inning that finally produced a winner.

Tribute
McCoy is a virtual hall of fame to both past and present Boston Red Sox players who spent time with the PawSox and later found glory in the major leagues.

Lining the outside of the stadium, large placards of past Boston greats include Wade Boggs, Roger Clemens, Dennis Eckersley, Pedro Martinez, and Jim Rice. Even former manager Joe Morgan, a fan favorite, gets a nod. (Morgan is the longest serving PawSox manager and later went on to coach the Boston team.)

Inside the stadium, many of these same players and historic park moments are profiled in wall mounts posted along the corridors around the concession areas.

Price is Right
Tickets range from $5 each for lawn access to $12 for a box seat. Parking is free at the park if you arrive early enough. Otherwise, you can find convenient spots nearby in the $2 to $10 price range. 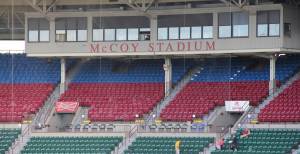 McCoy holds just 10,031 seats so it’s easy to quickly exit the ballpark after a game ends. (How long did it take you to depart from the Fenway area the last time you drove to a Red Sox game?)

And the price of concessions—including beer—is noticeably less too. Not a bad deal!

There is no denying that the 2014 Boston team has had a surprisingly disappointing year after winning the World Series just last year. On the plus side though, PawSox fans have been treated to seeing numerous current major leaguers start out or hold rehabilitation stints in Pawtucket this season, including Mookie Betts, Garin Cecchini, Allen Craig, Brock Holt, Will Middlebrooks, Daniel Nava, Christian Vasquez, and Shane Victorino. 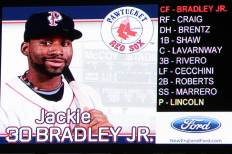 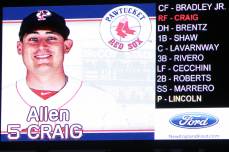 It is genuinely exciting for fans—both young and old—to enjoy such close access to some of their professional sports favorites. The minor league season ends soon. If you get a chance, head out to McCoy Stadium soon and enjoy a game.

It’s definitely worth the trip! 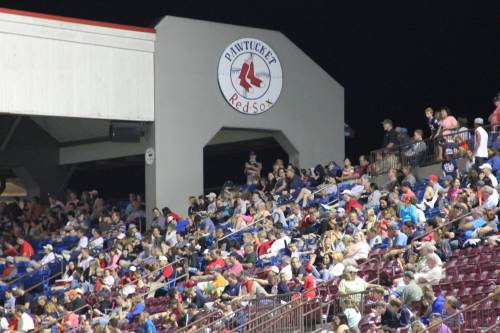 So what about you?
Have you ever attended a minor league professional baseball game? How do you compare the overall experience to attending a game at the major league level?

Minding other people’s language. A lot.

A Collection of Musings

A funny outlook on everyday issues

Becky says things about things and other things

'Ginger,' 'Bits,' 'Whinge,' and other U.K. expressions that have got popular in the U.S.

The latest news on WordPress.com and the WordPress community.